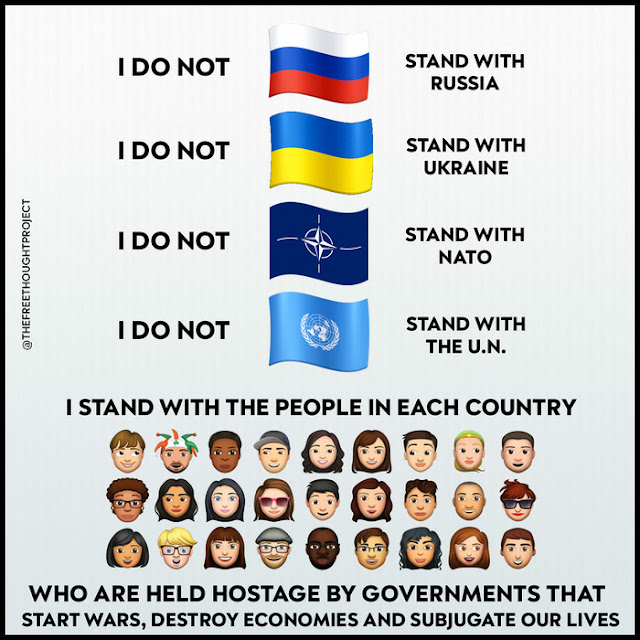 I like the Ukes. I like the Russians.
I love Americans.
Ordinarily I'd proudly stand with any of them.
But... when your best friend is picking a fight he can't win,
or one that he shouldn't....
friendships get pushed right to their very limits.
If that makes me a traitor in your eyes - so be it.

I see it all the time especially with the wanks that sit off to the sidelines and huffily declare that they are neither conservatives or liberals, or republicans or democrats because they are both equally bad or obnoxious, and beneath them. The moral high ground for them is as easy to attain by chickening out to the sidelines, assuming a holier-than-thou posture... and hope that it flies. Cretins - there are varying shades of grey, and although the area between black and white is there... it is not nearly narrow enough to justify that.

It's like those fags that 'don't see colour' - "there is only one race... the Human Race...". Tell that to the white toddler that got shot in the face by a nogger because he was there. Or the old lady that got kicked in the face in front of her home as she planted flowers - by a passing nogger. Or those grannies that got "run over at a parade by an SUV." Or the guy that got sued for a billion dollars because he had crazy opinions that rich powerful liberal jews don't like. There is no virtue in refusing to see dangerous or adversarial people for what they are.

. We readily acknowledge differences in genetics in dawgs, horses, flowers - you name it - but go squishy in the pants when genetic science is applied to humans. That's just the race issue. Cretins are heading for the sidelines on other controversial social issues too. The war in the Kraine should never have started. The Orange Hitler would have cut a deal with Putler and that would have been the end of it. Instead we have a senile derelict threatening to use nukes. In his prime he was a pedo and a moron. There are varying shades of grey... but ya don't need to be a genius or a virtuous visionary to see the shades.

Stuff like that meme above is how cowards and stupid people virtue signal each other. I get that people don't want to get involved with stupid fights with stupid people. But hell's bells... we've stuck our heads in the sand for 3 generations now, trying to avoid a fight with them... and now we are on the brink of WW3. Sticking your head in the sand won't work well for you when they start lobbing the nukes. If that happens - your virtue signalling won't mean a thing to our descendants (if there are any), and if anyone survives, your inaction will be seen the same way it was for the Germans that refused to do anything while their gov't set the world on fire in Nazi Germany.

If you're prone to this kind of behaviour... you need to get off your ass, and inform yourself. That means more than reading the head lines at MSNBC or listening to the faggots and vibrants on the CBC. If you think the situation in the 'Kraine can be summed up in 30 seconds by some paid actor scribblarian (hork, spit!) journalist, or some talking head posing as an expert - you need to either do some home work, learn to fact check... or join the stupid kids at the back of the class.

Do your home work, pick your side wisely... but don't put on airs of moral and intellectual superiority when what you're really doing is being lazy and craven. There is no moral superiority to be found on the sidelines and people will see your empty posturing for what it is.