The Battle For Perception

It seems to be a recurring theme on the internet that the war in the Kraine is being fought in completely different ways by the adversaries. For the Russians, it’s the classic battle of tactics, battle space, attacking enemy assets while carefully expending and defending their own. As you’d expect, they’re grinding down the last elements of the Ukrainian military now… and now they are starting to chew on NATO…or, pardon me, their “mercenaries”.

For the west, the war is all about perception. It’s all out PR warfare. It really is amazing when you think about it. In an age where real, solid information is cheap and easy… it’s only a click of the mouse away…we live in an age of “narratives”. Which is a polite way of saying politically weaponized propaganda. The vast majority of our narratives are driven by the mass media. On social media, pozzed platforms like Twitter and Facebook are patrolled and policed by censors that enforce the official narratives of the ruling class. Just recently I had to strike off two good men - the Intrepid Reporter and the Bitter Centurion. They had to be silenced for having the wrong opinions.

Most of us know our govts are shot through with Globohomo shills, carpet baggers, degenerates, perverts, diversity hires etc ad nauseum. Almost every single one of us knows you can’t trust the press or the media anymore as they are merely the propaganda arm for the gov't. And yet…

The US is winning that PR war hands down. Take some of our local celebs of the stubfart-O-sphere, the thot-O-sphere, and the…the…hag-O-sphere! HAR HAR HAR! HAR HAR HAR! I know, I know…I shouldn’t make fun… I apologize… but the point here is this: these people all position themselves as independent thinkers and hard noses that won’t hesitate to oppose their govt on moral and ethical grounds and will even take up arms and endure hardship if necessary. Fair enough… but not one of them can think for themselves. They get all their information from the mass media and think they’re informed. None of these goofs can even source their own information. If their govt ever DOES come to load them into the cattle cars and take them away to the camps, those idiots will load up and get on the train and laugh and sneer at you if you refuse to go with them! HAR HAR HAR!

We live in an age when our govts wield a propaganda machine that makes those of the old soviets and nazis  look lame. It's power is almost beyond belief. One would think the days of propaganda and mass lies would be over with the advent of the internet... but good grief! In nations where nazis are basically considered the lowest form of life, where fascist ideologies are basically illegal - we are sending so much money to these guys in the Kraine that we are literally bankrupting ourselves. We are taking the best weapons out of our military arsenals and giving them away for free to these fellas.

These are our allies hard at work in the Kraine,
and how they deal with those drunken, murderous Russian peasants.
The mass media will never poast vids like this.
They poast only those sanitized pics that show the Russians
committing atrocities.
But thes Russians in the Donbas deserve this, dontchya know!
Comrade Misfit and Tam said so!!!
This kind of thing is not new either… it’s been going on for
at least seven years in the Donbas.

Can you imagine yourself in Russian shoes? Probably not, so effective are the Globohomo propaganda machines and narratives. Perspective and objectivity are the enemies of narratives and agendas. But … let’s try it? Imagine if Canada started ethnically cleansing its cities and towns of ethnic Americans. Imagine if we started costing you Americans billions of dollars as we flagrantly cheated and screwed you over on trade deals. If you complained about it? “Fuck you, Yank! If you want to get stupid about it, we can have tens of thousands of Chinese and Russian soldiers here, and so many missiles and tanks, that we could be in Washington in 6 months. Less, if we get really mad! Nobody wants to hear your grievances, the cool kids on Twitter and Facebook hate you and make fun of you…so just sit there, shut up and take it!”

Imagine that if, instead of a Uke flag, it was the Canadian one as we posed for pics like this: 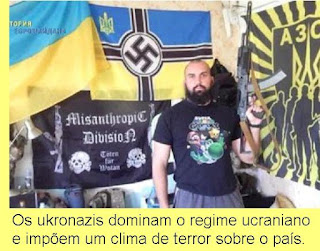 Take it easy, Schmuelley. I’m sure this is only some random
incel LARPing for his friends…
And you are one of them! Stand with him!
Even the fuggin JEWS are lining up to stand with these guys!  Don’t tell me that propaganda is dead in the 21st century! The mind wobbbles. Yet - this is what the war looks like to the Russians. And people capable of basic critical thought. 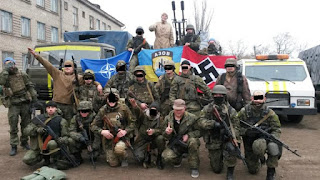 How did that flag get in there?
These are the guys whom the Euros support
as they face a winter with no fuel or employment.
The GERMANS are throwing in with them. In Germany, swastika symbols are banned and treated as hate symbols. But this year, they face poverty and squalor as they support full blown nazis in the Kraine. You’d think somebody might point this out to the guys at Der Spiegel. 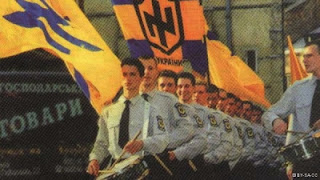 I’m sure any passing semblance to the Hitler Youth here
is purely random and coincidinkle, Tam.
Nice friends ya got there. 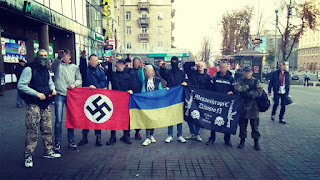 These are not isolated kooks. These guys are a
thing, and they are present in numbers in the Kraine.
You are not in Kansas, Dorothy.
And yet, morons like Misfit hang the Nazi label
on 'Putler'. The utter stupidity of that… I can
hear the devil laughing from here.

I could go on all day like this.  There was a vid going round on telegram when Marioupol fell. The Russkies brought in hundreds of buses to move the thousands of POWs they’d taken, and as they processed the prisoners…they ordered them to take off their shirts. They ended up with hundreds, possibly thousands - of shirtless men with necks and knuckles (and gawd knows what else) tatted up with swastikas, death heads, and SS lightening bolts. They got separated out. The Russians probably had plans similar to those of the Ukes in the vid above. Yup. REAL nice friends we have in the Kraine, eh?

In survival situations what you don’t know CAN hurt you. You might want to have a care for where and who you get your information from. There are forces at work here that haven’t been seen in close to 75 years. They may not be exactly the same as their ideological ancestors, but the metrics of the way they work are the same. Lie. Lie Big. Do it often. And... that is what the Ukes and our own mass media are doing. If you get your info from the mass media, Mark Twain wants to have a word with you. By the time they get through with idiots like Aesop - he'll be wearing a brown shirt and beating up women and old men. Tam and Misfit will rat out traitors and crime thinkers for him to beat on. That is the way these people roll and when they get a head of steam up - they can kill tens of millions.

I did not assemble this screed to beat up Aesop or Misfit or whatsherface - but to encourage everyone here to stop letting morons do your thinking for you. Dire times seem to be in the offing; you need good information and no one is going to give it to you. You need to take the info you get, fact check it, and and evaluate it in light of observable events. Narratives will get you killed, or lead you to kill someone you have no business fighting with. Think: if NATO, the EU and the UN were doing their jobs, Russia and the Kraine would be at the negotiating table.

Gathering your own intel and informing yourself without the mass media is daunting on the face of it but not impossible. It’s a skill, and you will get better at it with time. I can get you started: ignore CNN, MSNBC, CBC, BBC and all official mainstream sources - or at least regard them with deep suspicion. Those guys do not do investigative journalism anymore, they are just a bullhorn for the gov't.

Type it into your search engine: "Why does Russia want the Ukraine?"  You will be in for about 20 hours of podcasts, essays, and reports generated by people with boots on the ground, from Russia itself, and of course, you’ll see blatant pro-Russia propaganda. You will see vids and photos that directly refute the narratives we see being pushed here. Fact check the people talking that purport to give you the 'real facts'. Expect to get burnt the odd time. Guys like Matt Bracken are excellent objective starting points. More videos, more essays. This is a complex issue. It cannot be summed up by the homosexuals and talking heads of CNN in 30 second sound bytes, or ten minute interviews with experts like Aesop, Misfit and Tam. For those idiots, the blatherings of the mass media are all they need to slap the 'launch' button and head for the fallout shelters. Do you want to take potential survival advice from people like that?

Don't worry about 'showing your work' to that lot either - they have neither the attention span or the depth of intellect to check you. Form your theories and be vocal with them and invite critique. The goal is to inform yourself so that you don't do anything stupid, or cause anyone else to either.. Show your work to objective, sober minded men with reputations for clarity. (I realize that lets me out along with Aesop, my authority and expertise is limited to rude jokes and ignoramiae).

I think that if you take the time and do all that - eventually you will arrive at where I am at. This war is not about the Kraine. The only relevance of the Kraine in all this is as a proxy for money laundering douche bags like Kerry, Pelosi, Romney and Biden. The REAL goal here, is regime change in Russia. And Globohomo will fight to the last Uke to achieve it - and will possibly throw in the their allies in Europe to do it.

Don't be a peon pawn, folks. Think for yourselves. At some point, when the morons answer to Darwin and Murphy... you're going to have to anyway. Without good info... all your preps and hard work are worthless.

Have a great Monday. Be smart today.